Monster Bash is the fourth mission on Earth. Fry is required to enter this mission. 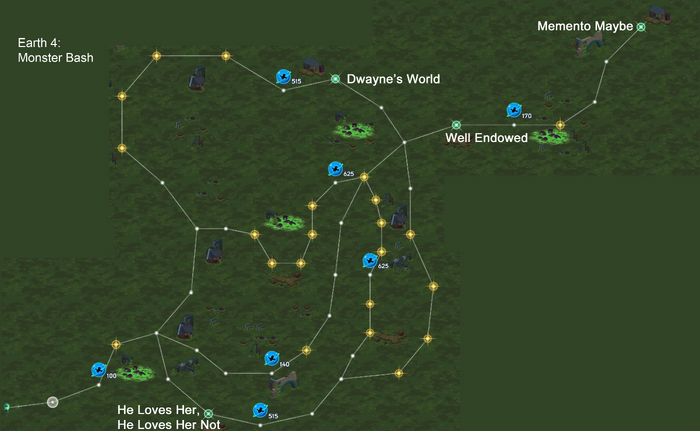 It's a riddle wrapped in a mystery inside and enigma inside Dwayne.

Mutant Dwayne sits by Lake Mutagenic with something on his big mind.
When the sewers became unstable, I distracted myself with philosophical riddles. Would you like to be freed from the shackles of reality?

Let us begin... what has a face and two hands but no arms or legs?

Second riddle... what has a neck but no head?

Last riddle... what has to be broken before you can use it?

Before agreeing to underwear[]

Mutant Vyolet is weeping. She's not the only one with watery eyes.

After agreeing to underwear[]

Vyolet hasn't moved. Nothing weird about that.
How dare you keep a lady waiting in the sewer? Did you get what I wanted?

All Paths, Second to last node

Before agreeing to underwear[]

Raoul keeps coming back. Be thankful he's not selling insurance.

Mutant Raoul approaches looking for a hand out. Three hands out to be precise.
We've made almost enough money to rebuild Lake Mutagenic. Can you find it in your heart or hearts to help?

After agreeing to underwear[]

Mistaking you for a kind soul, Mutant Raoul strikes up a conversation.

The Lake Mutagenic Relief Fund has benefited countless mutants suffering the sewers. Care to donate for a hefty reward?

Find something to jolt Leela's memory. A memento, or jumper cables.

At Leela's parents' house, Fry looks for stuff to jog her memory.
Fry: Leela thinks she's a robot. Will mementos make her remember her memories?

Fry: This is worth keeping so that it doesn't fall into the wrong hands.
Fry: I better find a Mac item in case she's not DOS.

Fry: It's from me! This is sure to scramble her circuit board!
Fry: Cross your fingers. And your robodigits.

We need to find mementos of Leela's past, to remind her who she is.

Looks like we'll need to battle these unfriendly mutants first.

Why do we always have to do the deadly part first?

To me, looking through mementos is the deadly part.

Do you mind if I look inside your house? Leela thinks she's a robot and I want to give her something from her past to snap her out of it.

Okay, but you do know Leela didn't grow up here so there's not likely to be any stuff from her past, right?

Shhh! I know that, but the producers already designed the set, so I kind of have to take a look around.