Insider Misinformation is the second missions on Chapek 9. 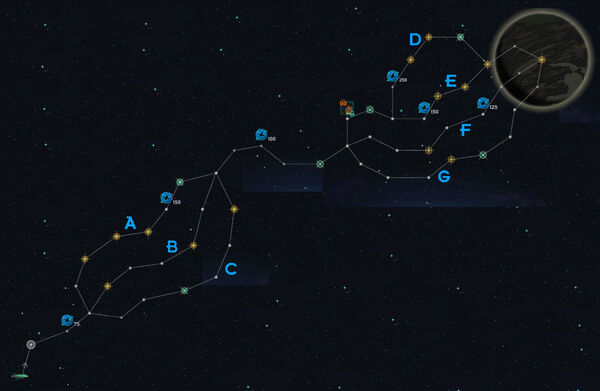 Who will crack first?

En route to Chapek 9, you see a Decapodian trading ship. What's not to like?

You meet an astronaut and hear a terrific offer that you can't unhear!
Astronaut: Hi! Would you and your brain like to join my crew?

Astronaut: All you have to do is put on a "Members Only" hat.

He brings great shame to his family.

As you make your way into the city, you meet a robo guard who appears to be conflicted.

How robo can Hermes go?

I can prove a robot mon is inferior to a human mon, mon,
You can't spell "humiliation" without "human". Or "ilitio."

It could stand to lose a few pounds or dollars or priceless artifacts.

While wandering Chapek 9, you notice human footprints. What do you make of that?

Connect with a robot on a superficial level.

The crew engages with a Robot Actor.
Robot Actor: If you're not here to eat me, what do you want?

I can't believe I'm TRYING to make these robots hate humans again. I don't even know where to start.

My plan is to torture them in devious ways that only a human could think of.

Do you think that'll work?

No idea, but I've made too many "Kick Me" signs to change course.

I think our plan is working. The rebellious robots are getting distracted by their instinctive human hatred.

I've always been good at getting people to hate me.

You are so luck! Between my wealth and cuteness, everybody always adores me.

Yeah, we all have our crosses to bear.

We've angered pretty much everyone on Chapek 9. Anti-human sentiment has reached a fever pitch.

Yeah, I'm pretty sure they're forming a mob to capture us.

How can you tell?

That grocery store is having a sale on pitchforks, nooses, and fire.

Should we be worried about anyone else coming after us?

I wouldn't worry. Unless you refused to hold the elevator door for some robot.

I was about to...but we should be okay. At the last second I refused to hold it for all of them.

Robot Actor: Back off, human! You're never gonna eat me alive!

We don't want to do that.

Robot Actor:Actually. I wouldn't mind if you wanted to eat me alive just a little bit.

Really, I have no interest in doing that.

Come on, human! Eat me alive or I'll kill you!

We need to ask you a question. Why do you always wear that human mask?

Robot Actor:Ever since I was a microcircuit. I never felt like a robot. I just wanted to be human. I became an actor so I could human-dress without everyone getting suspicious.

Robot Actor: Anyhow, what about you? Why do you wear that hideous orange-haired gorilla mask?