The following is a list of the different types of currencies in Futurama: Worlds of Tomorrow.

Nixonbucks is the main currency of the game. It can be used to buy buildings and decorations and level up characters. They are earned from buildings, character actions, and space missions. They can also be bought with pizza or with real money.

Pizza is the premium currency of the game. The player can buy it with real world money, or it can be earned through special offers, advertisements, or as special in-game rewards. A single piece of pizza usually costs between 2.8¢ and 4¢ in real U.S. dollars to purchase, depending on the package purchased.

Hypnotons is another currency of the game. It can be used to clear blocks of land and clear special buildings, specifically ones with main characters, such as Bender and Leela and Hermes to name a few. It can only be earned from space missions and cannot be purchased.

Experience is a secondary currency of the game. It adds to the player's overall level and each new level gains a reward. It is earned from buildings, character actions, and space missions.

Fuel is a secondary currency of the game. It is used by the Planet Express space ship and is emptied by completing space missions. Players can refuel their ship by waiting for the timed refuel or by purchasing refuel items that cost pizza.

Special events may also have a secondary currency that has to be earned. These currencies depend upon the specific event. Some events may even have more than one type of currency! 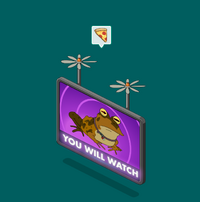 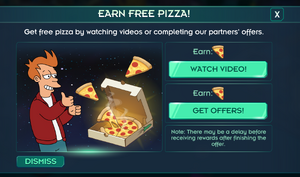